Aaaaaargh! It’s almost been a year since I changed anything on this blog!!

Well, many things have happened – maybe I have an excuse, maybe not. I worked at Modal Electronics from April 1st 2015 to May 1st 2016. Working at Modal was fun and a good learning experience, but ultimately it was all consuming and I was feeling a real weight on my shoulders for having to give up many of the things I loved doing, and eventually decided that being normal just wasn’t for me. Anyway, between then and now plenty has happened…

One interesting outcome from my time at Modal was that I began selling off much of my modular noise making gear as I didn’t have the time to work on music or gig as I did before. I ended up with a reasonable stockpile of cash as a result and being a total man of the moment, I decided to actually buy something that I didn’t dream I would ever have the opportunity of owning – which was a pretty fully featured Hordijk modular system! Now if you don’t know who Rob Hordijk is, it’s probably a little too much to go into here, but it should be enough to say that he is probably the biggest inspiration in both my design and my musical composition over the last couple of years. I contacted Rob in September 2015 and there was a 6/7 month waiting list to get a system (they are entirely hand made by Rob right down to the etching of the PCBs!!). I eventually collected my new system a week after I departed Modal in early May. I was experiencing some personal turmoil over forking out most of my savings for something as I was effectively unemployed, but I travelled by coach to Den Haag in the Nederlands to collect the system and kept reminding myself on the way that it was my dream setup, and I had been waiting a long time for it. Since I got it home I haven’t looked back, and hey – there’s plenty of flavours of super noodles to choose from 🙂

As you might have guessed I have now invested a lot of time into my new instrument. Over the last month I used the system for two solo gigs and on a recording I will share in another post. I am now working on a release with Difficult Folk in Berlin which should be ready pretty soon now. Anyway, I have plenty to write about the synth but don’t need to get it all in here. For now here are some pictures:

Here is the system with its father, Rob Hordijk: 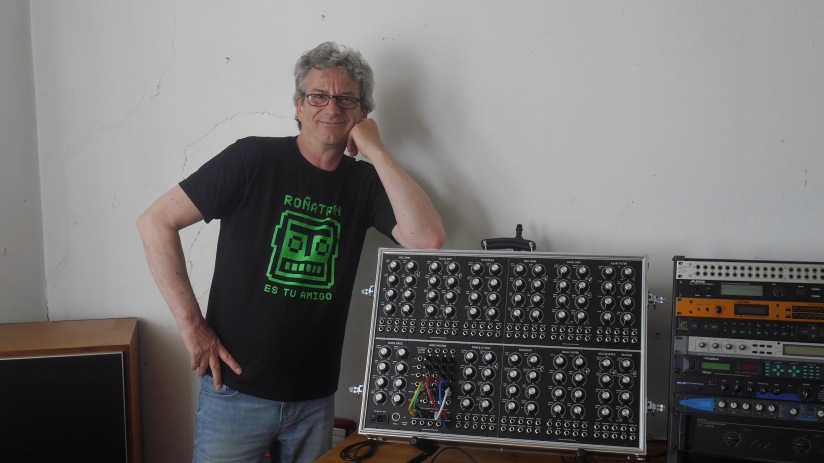 And here it is patched up at home: 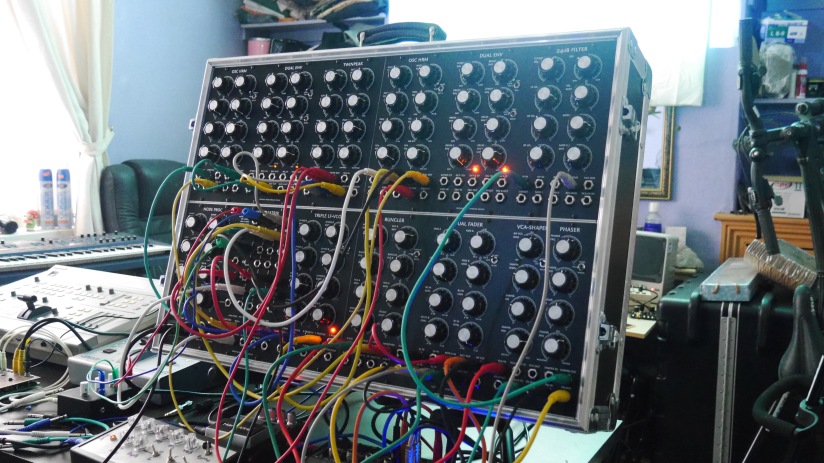 I am making a real effort now to become self sustainable with my own creative work, and I have a passion and ambition to continue working with electronic design. Most recently I have been working hard on a new workshop project that is OH SO CLOSE to being finished now 🙂 I’m not quite ready to share all the details, but it is going to be a nicely featured and fairly unique noise instrument that I feel safe to say has some strong design elements. The main aims of the project are for it to be educational, flexible, stand alone and expandable. I do have a little teaser, as I used my prototype (built into a £1 lunchbox) in this little set with Matt Lovett at Cardiff: MADE on the 11th of this month, I also used my Benjolin (another of Rob’s concoctions) and a homemade delay of my own design, so see what you can pick out:

Other than that, you will have to wait for a proper reveal! 🙂