Thanks for visiting my blog, I intend for this place on the web to be about my work in audio DIY, synthesisers, and audio/visual works. I can’t say that I have really decided the best way to make use of this blog or how best to document my activities, hence there being sporadic posts on subjects and unfinished pages, but I hope you find some enjoyment and use out of the information that lives here.

I am a freelance engineer and designer working with sound, that’s the easiest way to sum up what I do, but below is a list of services (or habits) that you can find me involved in:

If you want to talk to me about your project – or one of mine – please find details in the contact section of this site.

Below is a little more about me:

I think of myself as a musician and a tinkerer and juggle between those two worlds. I grew up in the Welsh valleys and I am now based in Newport. My later education was in Music Technology followed by a more arts based route in music study at the now extinct University of Wales, Newport. I studied under Matthew Lovett and Andre Ktori, who were (and are) both incredible individuals and massively supporting of my work. Through my later years of study I discovered electronics, I never had any formal training but had some helpful mentoring early on from Kim Mayne, a technician in the Fine Arts dept.

My interest began in the chaotic anti-thesis of Circuit Bending, a practice and viral phenomenon largely attributed to Reed Ghazala. Circuit Bending is all about the unworking of devices, taking apart the obsolete forgotten electronic toys and cheap instruments of the last generation and rewiring it to create something new and alien. If you are interested in learning more about circuit bending, you will find endless results by entering it in as a search criteria on Youtube, and there is a wealth of information on the website http://www.circuitbenders.co.uk/ Below is an awesome video of one of my favourite all time mods, an expanded Yamaha PSS-790 (featuring my now deceased companion Camus):

Around the same time I discovered Nicolas Collins’ work through hs awesome book “Handmade Electronic Music: The Art of Hardware Hacking”, a book with a healthy supply of simple DIY audio projects to build and hack. The book became my bible for years and was the foundation of much of my early performance work as Ginko. I would recommend it to anyone wanting to start out making their own toys for noise!

Ginko was a performative project I set up as a way to play and experiment with the devices I was creating. I also had a growing interest in noise and drone music and so Ginko provided a body to explore that. I built a number of slightly crude droning oscillator devices and matrix mixers for this project, and also had some early endeavours with the PT2399 echo processor chip. I also worked extensively with light sensors in this work and built performances around the use of controlled light sources. I later worked with Anthony Rees and Ieuan Llewellyn on some collaborative works under the same project name. Below is a picture of me performing as a hairy Ginko at Supernormal Festival in 2012: 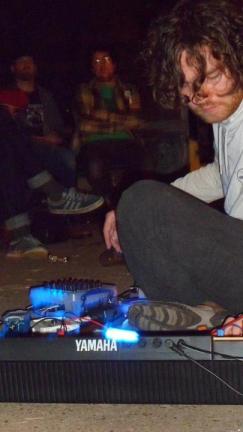 And a very early (but still one of my favourite) Ginko performance at Newport City Campus during my MA study:

Off the back of this work I started running instrument building workshops with the interest of bringing more individuals into the hacky audio scene. Over the last couple of years I have designed and hosted workshops for circuit bending, making simple electronic instruments and making electro-acoustic instruments out of found objects and junk. My most popular workshop to date is a mini noise synth workshop that builds a light sensitive instrument called the “Swashbuckler”. Check out the Swashbuckler page on this site.

Over the last couple of years I have become involved with modular synthesizers, and synth DIY. I had to kick myself once I properly got into it because I had been casually ignoring the synth DIY scene for years – there is no way I can really describe the extent of the information resources available in the forum and blog fringe worlds. A big leap for me in my learning and understanding came through Ray Wilson’s website “Music From Outer Space” – a superb resource! I have built a couple of Ray’s projects and dipped into the knowledge base on his website many times. I have a fairly well documented account of my construction of Ray’s “Synth DIY Experimenter” on this site here and I encourage you to visit the MFOS site and have a look at the treasures within. At the time of writing this, the Wilson family have reported that Ray is very ill and he is no longer actively engaging in his work until his health improves – I wish him well in his recovery and his family all the best.

Through synth DIY I started building up a modular synthesizer system in the somewhat popular Eurorack format (that’s effectively just a specific panel size and PSU standard if you’re not in the know) in 2012. I used this system mostly for live performance and got into a psuedo-improvised approach to working with the modular format. I have taken my system to gigs all around the UK and today play in an audio/visual duo called Form Constants with my partner Kim Da Costa. A slightly grainy video but below is a live Form Constants performance from Christmas 2014:

After studying I worked at the University of Wales, Newport (and later the University of South Wales) as a sound technician and later as an instructor and lecturer. I covered topics of studio recording and use of a range of audio software applications and later delivered a module in audio electronics. I was also lucky enough to do some work with Arduino and synth building with students at some sporadic points across the years!

In April 2015 I was presented with the opportunity to have a career shift and work with synthesizer hardware full time as a development engineer for Modal Electronics, an opportunity I of course jumped on – I spent a year working directly under Paul Maddox in the design and manufacturing of Modal Electronics products.

To find out about things I am working on at present please check out the front page of this blog!